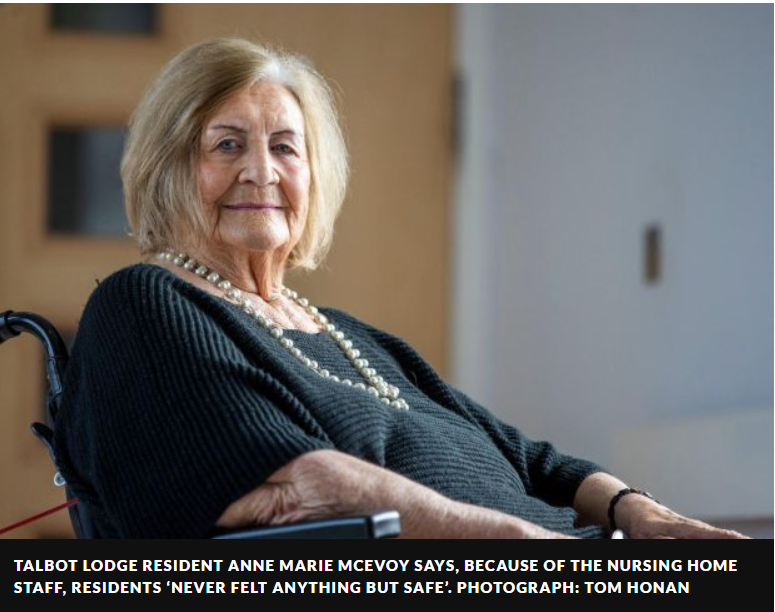 An extremely moving piece in today’s Irish Times detailing the lived experiences of some of our Residents during the Covid-19 pandemic and the exceptional dedication, compassion, and care shown by our amazing team at Talbot Lodge. Feb 26 2022

Ann Marie McEvoy (85) has been living in the Talbot Lodge Nursing Home in Malahide since she broke her leg in a fall more than four years ago. She’s sitting in a wheelchair in the lobby, telling me about how her husband Barney died just over a year ago. He was 89 and was still living in their house. “He went into Beaumont with a little pain in his side. The next day, Tuesday night, they rang my children and said, ‘You have to come, your father is in a coma.’ They stayed with him all day Wednesday and he died on the Wednesday evening.”

Ann Marie couldn’t go to him. “The fact I never said goodbye to him was the worst,” she says. “When I rang him, he was unconscious and my children were with him. He started to smile. So he knew it was me. I said, ‘I love you’ and a few things like that. . . And he died a half an hour after that.”

She met Barney more than 60 years ago at a dancehall in Malahide on a night the Clipper Carlton were playing. They loved dancing. Nowadays she likes watching dancing on the internet. There’s a particular advertisement on the TV for Specsavers in which an older man dances. “You’d think he was my husband. It’s the way he used to dance. . . Every time I see it my heart skips a beat.”

Ann Marie couldn’t be at the funeral. She watched on a screen from her room. Debbie O’Reilly, one of the care staff, came in on her day off and they both dressed in black and watched it. Her granddaughter read a eulogy about how Barney would tell stories about how he and Ann Marie met. “He would tell them how much he loved me. It was quite sad for me, but it was lovely.”

“Debbie stayed with me all through it. . . She is without a doubt one of God’s special people. . . She even got into bed and cuddled me because I was so sad. . . It was the worst year in my life as regards sadness.”

That summer she was very ill and spent seven weeks in hospital. “I rang my children and said, ‘I’ve made my peace with God I am definitely going to die.” She laughs. “They always say, ‘Mother, it’s hard to kill a bad thing’.”

Ann Marie is stoical and kind-hearted (“Was it hard on you not seeing your own mam and dad?” she asks me). Her children and grandchildren all live nearby. In lockdown, she passed her time reading – a history of India, a book about Phil Lynott whom she loved (she knew the family) – and writing to her two childhood friends who live in the US & UK . “We’ve known each other 76 years.” In the early days of the pandemic her family came for “window visits” but it was tough on Barney being outside in the cold. “So we talked all the time on the phone instead.”

Thanks to the staff of Talbot Lodge she says:

“We never felt anything but safe.”

Talbot Lodge is part of the Brookhaven Healthcare group. It locked down two weeks earlier than most other places in March, 2020. Eveline Sheeran, the clinical director of the group, slept on a folding bed in her office as she grappled with changing guidance from public health authorities and explaining developments to staff, residents and their families. They had a good supply of PPE (a staff member recounts how in another nursing home he worked at they had to use painting overalls from a hardware store and gloves donated by an agricultural college). 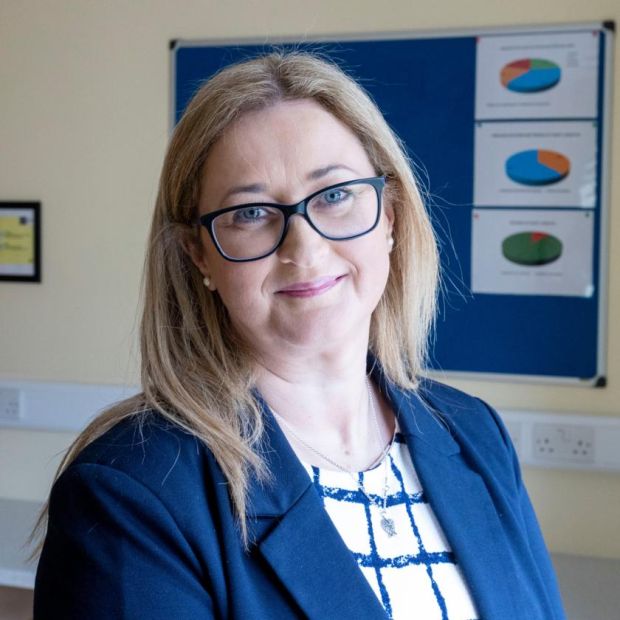 The Brookhaven group avoided Covid-19 until January 2021 when its premises in Stradbally, Co Laois, had an outbreak. This was followed by outbreaks in its Castlebar and Galway homes. Talbot Lodge was spared an outbreak until a month ago, and then it only resulted in mild illness. “I had travelled through the [Brookhaven] homes with outbreaks,” says Sheeran. “And it was very, very evident that the homes that had received the vaccination had very different experiences when it comes to outbreak to those that hadn’t . . . I’ve spoken to people who had outbreaks very, very early on, and they felt really isolated and abandoned.”

Things aren’t yet back to normal at Talbot Lodge. Two visitors can visit each resident, but here those visits have to be scheduled. What was formerly a cafe that could comfortably hold 20 people and contained couches, paintings and a play area for grandchildren now looks a bit empty with just four women chatting. “It looks a bit stark because there are no pictures or homey bits,” says Sheeran.

‘The residents with dementia really struggled to understand what was happening. ‘At first they would keep asking every single day, ‘Why do you wear a mask?”

These residents are keen to downplay how hard it’s been. “Do you remember the very beginning though, two years ago when we had shut down completely and nobody was allowed down and we used to do the video calls?” asks Sheeran.

“At least you have company here,” says resident Rose Keane, who was an accountant before she retired. “If you were at home you’d be locked up alone.”

What did they do in lockdown? “I watched television and I read,” says Claire O’Donnell, who formerly ran a shop. “I’ve loads of books in my room. And I also used my phone a lot.”

O’Donnell and Keane are good friends. They occasionally glance at each other and laugh after my questions. “We’re like sisters,” says Keane.

“If you can’t have a laugh in this world you might as well give up and die,” says O’Donnell.

As the photographer takes the photo, a woman named Marie Long sings I Have a Dream by Abba. She has a beautiful voice.

There’s also a dog wandering around the lobby. He’s a 15-year-old Labrador named Alfie, a gentle giant. “The patients love him,” says team leader Debbie O’Reilly. “When they see him some of them say, ‘Here’s the horse!’”

What has this been like for staff? “There was pressure but because the residents were isolating from their families, you kind of feel like we’re their family,” says O’Reilly. “So you kind of forget about the pressure.”

“It was scary at the start,” says clinical nurse manager Marija Reger, who is from Crotia. “But it stuck us together. A few of us are from abroad. We don’t have families here so we would actually take comfort in the second family of co-workers and residents.”

The residents with dementia really struggled to understand what was happening, she says. “At first they would keep asking every single day, ‘Why do you wear a mask?’”

“They learned to know us by our voices,” says O’Reilly.

They both think that the lockdowns have had a huge negative effect on some residents. “What they need is consistency,” says Reger. “If someone is getting a visit from the family every single day or every single week, if we take this away, they will start progressing downward.”

“One of the family members came in to us and the resident got really distressed and upset because they couldn’t really remember who it was. . . and they wanted me there,” says O’Reilly.

Staff were terrified of bringing the virus into the building. For two years, says O’Reilly, “I didn’t go anywhere, even to the shops, because. . . what if I bring it in here and someone catches it? I isolated myself from everyone.” “We found comfort in each other,” says Reger. “Cracking jokes and having a laugh.”

They sometimes had to deal with angry family members who couldn’t understand why they couldn’t visit whenever they wanted. “People don’t understand that we were just implementing the restrictions,” says Reger. “Some families gave out to us. But it’s okay. We understand.”

I ask O’Reilly about when Ann Marie McEvoy’s husband died. “He was a gentleman,” she says. She recalls sitting with her and hugging her. Even thinking of it makes her feel emotional.

“I can’t even remember the normal days,” says Reger. “We became nurses, carers, hairdressers, makeup artists, a shoulder to cry on. We were everything for them.”

Why do they do it? “It could be my mum or dad,” says O’Reilly. It could be me one day. All they want is a little love. A little hug.”